What Dreams May Come 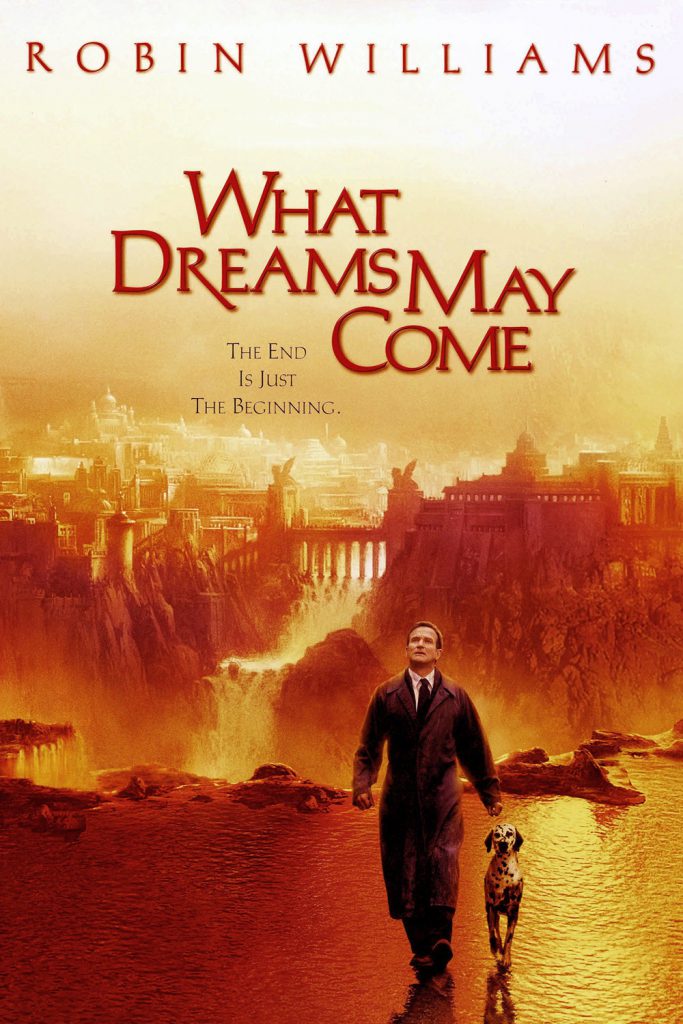 I have deliberately gone into deeper levels of details in this review than a standard quick review. My intention is to give you insights into the research and unseen dimensions of movie-making that make certain films unforgettable.

This film’s exploration of the afterlife was made in America in 1998. The film is a mix of romantic and fantasy genres. Director Vincent Ward based his film on the novel with the same name by Richard Matheson[1]. Matheson based the 1978 novel on research into the afterlife. The extensive bibliography in the book (88 books) includes ancient Eastern beliefs about the afterlife and contemporary spiritual concepts. The film’s Producer, Barnet Bain, is a very spirited, creative soul. I had the good fortune of meeting Barnet at the Illuminate Film Festival, when Transcending The Storm had its world premiere.

Robin Williams is the film’s protagonist (the main character). He plays Chris, who undergoes intense trauma through bereavement. Following this trauma, he experiences the afterlife, guided by a being from that reality. With this seeker of lost souls, he ventures into hell to try and retrieve someone he loves.

The majority of the film is set in the afterlife. The film constructs the afterlife by using vivid warm colours and enchanting sets/special effects, so the afterlife is obvious for the audience to recognise. The scenes of the afterlife have similarities to surrealist and romantic paintings. The use of warm colours and dramatic visions of light, create a dreamlike image that fits perfectly with the fantasy world presented in the film. These well-known styles of painting help the director to utilise common culturally accepted representations of images of the afterlife and heaven. This can support the audience to temporarily suspend their belief of reality by providing strong references to established art forms that are meant to represent the afterlife.

The writer uses Buddhist beliefs about the afterlife within the film. An example is when the protagonist (Chris) ends up in the afterlife. When he arrives there, he is surrounded by colour, light and beautiful tranquil sounds. Sogyal Rinpoche describes, ‘the landscape of light (…) suddenly you become aware of a flowing vibrant world of sound, light and colour’.[2] These words, taken from The Tibetan Book of Living and Dying are referenced in the research of the novel that the film is based on. As well as Eastern religious concepts, the film draws on Western Christian beliefs. Even though the depictions of Heaven and Hell have a slightly alternative perspective, these models of the afterlife have Christian roots that the audience can identify with. Contemporary spiritual beliefs are also used in the film about near-death experiences and the afterlife. We see someone who is dying, floating above their body as a spirit. They then go through a tunnel towards a light; the whole screen is engulfed in bright white light as they enter the afterlife. Author Michael Newton writes, ‘souls experience an increasingly brilliant light around them (…) and will sense passing through a tunnel’[3]. The tunnel of light scene created in What Dreams May Come has dramatic parallels with my own personal near-death experience. There are now literally hundreds of documented accounts describing a near-identical journey that people have described after returning from a near-death experience.

The film uses dialogue common to the field of psychoanalysis and draws from the theories of Sigmund Freud. Chris is accused by his spirit guide of being ‘delusional’ and ‘in denial’. Another link to Freud and psychoanalysis is the similarity of the look of the tracker to Freud. The tracker knew Chris. In fact, he was his psychiatrist. The tracker, Max von Sydow, is famous for his role in the Ingmar Bergman film about death called The Seventh Seal made in 1957.[4] I believe these transparent cues are utilised to trigger the audience into drawing reference from common cultural beliefs about psychoanalysis.

I have watched this film about 10 times over the years. The viewing I have just had still moved me to tears. This is essentially a love story, with strong messages about destiny, playfulness and synchronicity. It is rare for a film to go so deep into spiritual realms and at the same time create such ‘food for thought’. It covers some very raw human emotions and states. It gives a great portrayal of suffering and loss. It also offers some very interesting perspectives on denial and forgiveness.

As someone who has survived a near-death experience, I was impressed by the film’s depiction of the dying process. I enjoyed the filmmaker’s attempts to portray a near indescribable liminal space. And the actual tunnel of light scene is extremely well-crafted; plenty of research went into this sequence. The only thing that films cannot depict, is the incomparable feelings of love which near-death survivors feel as they transcend this life.

This film reinforces a belief that many people have, including myself, that on the edge of our choices lies unlimited beauty. There are also strong teachings about how we create our own reality, both in this physical life and our spiritual life.

One of my favourite characters is the tracker of souls, called Doc. This character, performed brilliantly by Max von Sydow, is the perfect portrayal of a finder of lost souls. This Freudian Psychoanalytical Father figure is a treasure trove of guidance in the film. Doc, guiding Chris, explains that, ‘The real hell is your life gone wrong.’ He tries to guide Chris to reflect on the areas of neglect that he had for his children. This pattern is still with Chris in the afterlife.

Beyond entertainment, which this film provides on a massive scale, the filmmakers are determined to make the viewers observe and analyse their life choices. This is one of the most reflective films on life, death and beyond that I have ever seen. And even though this film was from the 90’s, the special digital visual effects are still stunning. Also, the cinematography, which is filmed in places like Niagara Falls, is beautiful on so many levels.

If you have the chance, watch this film on a full HD Television, and enjoy imagery and visions that have never been trumped since.

Be ready to be transported into a euphoric vision of a life beyond what society asserts as ‘our lot’. This film is layered with love. It also inspires us to support everyone we know to be their true self, without comparison.

My favourite line from the film is, ‘Good people live in hell because they can’t forgive themselves.’ This is the work in progress… for every one of us. I hope you take the time to watch this film again, or for the first time. May you, like the many heroes in the film, ‘make different choices’ as a result.

This film has stood the test of time and is Robin Williams’ gift to the world. On behalf of the millions of people who may make different choices as a result of this work of art, Thank You Robin. Shine on.